Glaucoma is a condition in which the nerve cells that transmit information from the eye to the brain become damaged. This prevents visual information from getting from the retina in the eye to the brain. Glaucoma is often associated with a build-up of pressure in the eye. The eye is normally filled with fluid that is constantly being replaced. If excessive amounts of fluid are produced or if it cannot drain away properly, the pressure inside the eye can increase. In some forms of glaucoma, the pressure inside the eye can become extremely high, while in other forms the pressure may remain normal.

The exact causes of glaucoma are not known. In some cases, the drainage network of the eye may not be formed properly, or may be become blocked by natural materials or due to injury; in other cases, there is no clear cause.

Is the damage that occurs in glaucoma serious?

If untreated, glaucoma can cause blindness. As the nerve cells are progressively damaged, the ability to see objects in different parts of the visual field is lost. This can progress until only central vision is left or until the person is completely blind. The longer the disease is left untreated, the greater is the likelihood of damage. Once damage has occurred, it cannot be reversed although often it is possible to prevent further damage. Modern examination techniques and treatment have made glaucoma a rare cause of blindness in Australia.

How can I tell if I have glaucoma? 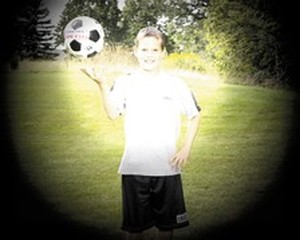 Often you will not be aware that you have glaucoma until it is too late. Usually there are no symptoms until permanent damage has occurred. In some cases, the increased pressure in the eye will cause blurred vision, apparent coloured rings around lights, loss of side vision, and pain and redness of the eye.

How does an optometrist diagnose glaucoma?

To diagnose glaucoma, the optometrist looks at the nerve fibres at the back of the eye, examines the eye's drainage network, measures the pressure in the eye with a special instrument called a tonometers and sometimes tests the field of vision. These tests are simple and painless.

How is glaucoma treated?

Initially, eye drops and medicine are used to treat glaucoma. Surgery may be necessary if the blockage in the drainage system cannot be removed in other ways.

Can glaucoma be prevented?

No. Early detection and treatment are the best way to control glaucoma.

Who is likely to be affected by glaucoma?

People over the age of 40 years are far more likely to have glaucoma than younger people are. Glaucoma tends to run in families. People with a blood relative who has suffered from glaucoma and people over 40 years of age are at risk and should have their eyes check regularly by an optometrist.